During the Fall of 2021, my Nissho PDP-11 (11/94 equivalent CPU in a PDP-11/34a BA11-K and DD11-PK chassis set-up) was humming along unmolested when it suddenly stopped communicating over Ethernet.

Installed in that machine was a Digital DELUA M7521 Network Interface board.  And it decided to quit working.

Ethernet networking is important to me to be able to transfer large amounts of data from my simh PDP-11 2.12BSD (My versioning of a completely refactored 2.11BSD with many extensions) to the real PDP-11 machine for boot testing and performance.  I also use that machine for imaging RL02 drive packs and utilizing SMD disks (CDC Sabre SMD, Mitsubishi SMD drives and a CDC RSD 80 megabyte cartridge drive).

The first thing that I noticed was that the power light was not illuminated on the transceiver bulkhead panel for the cable connection to the DELUA board.

The DELUA User Guide, EK-DELUA-UG-002, section 6.2.1 "Selftest" under "Troubleshooting" on page 6-1, states the following about indicator light at the bulkhead:

The fuse at the bulkhead assembly was OK.  But a VOM meter shows no voltage at the fuse.

Time to check the -15 V path coming from the backplane.  According to the chart provided on page 2-2,

Here's the pin on the connector: 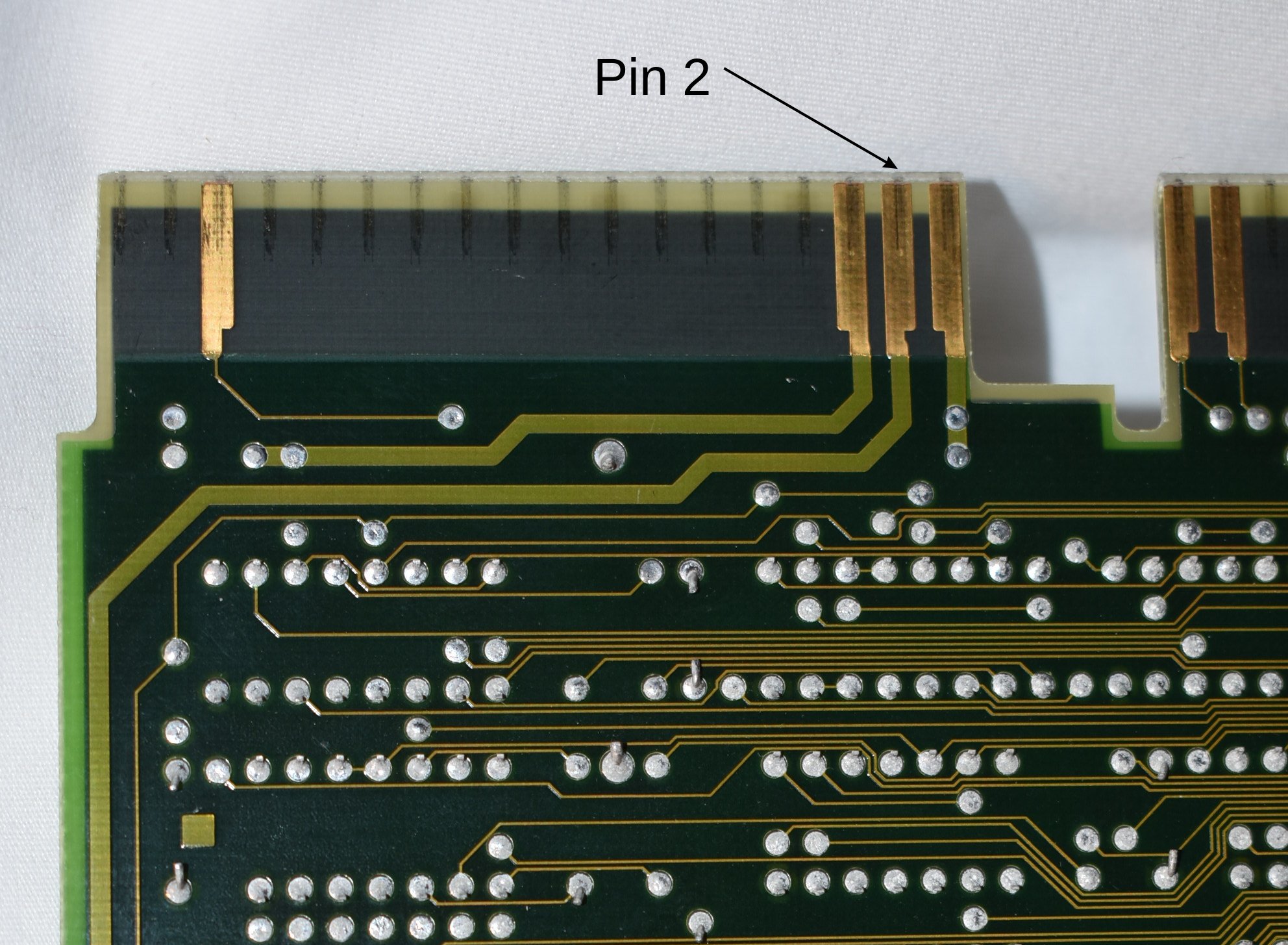 I followed that thick trace from pin 2, along the edge of the board, going up to the top corner where the chassis lever is, to its termination at a through-hole junction to the component side.  The component side is a through-hold fuse component which returns back to this side at the "Post-fuse connection" point identified.  This circuit continues to the pin on the berg header to the left to which the bulkhead cable attaches: 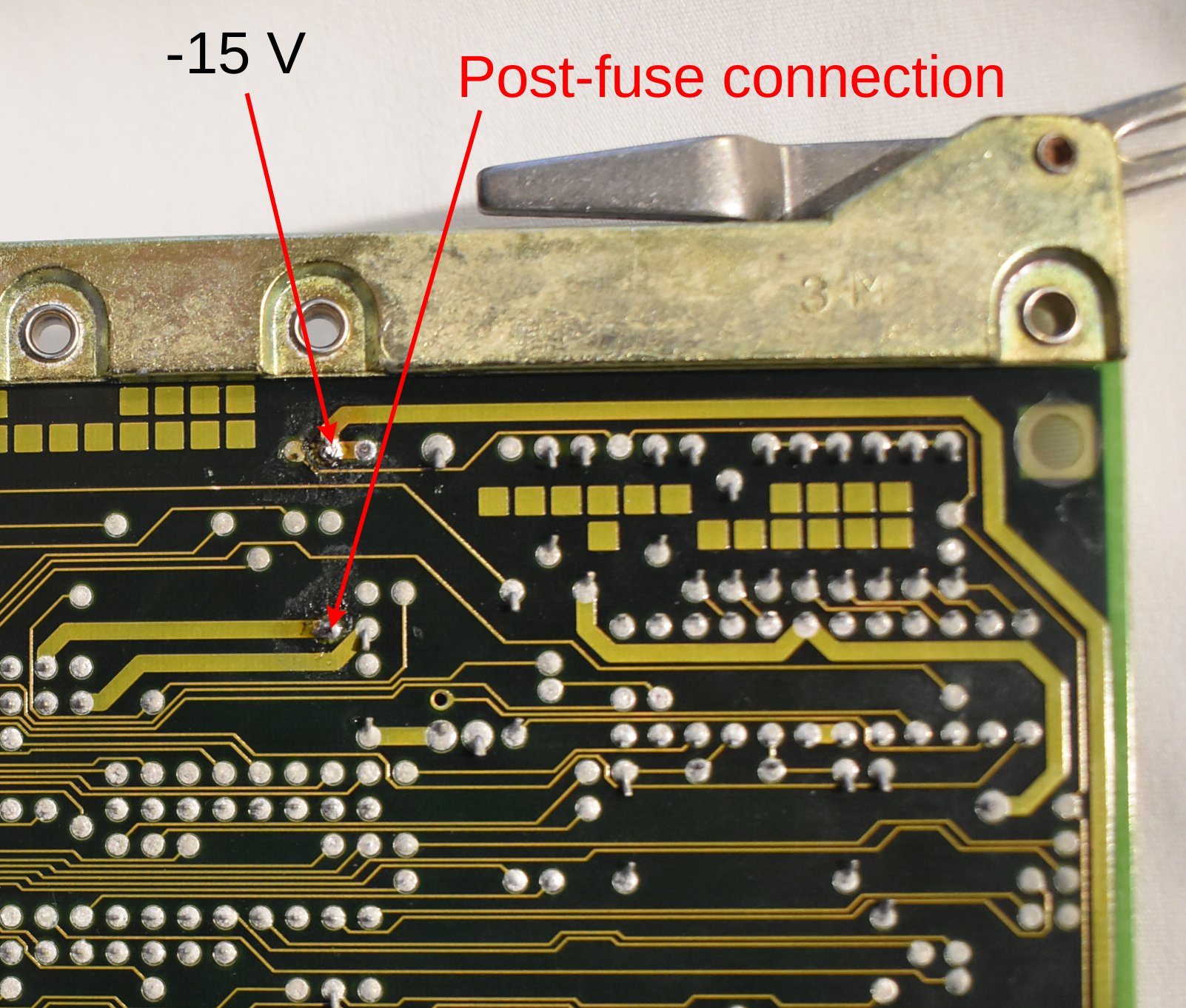 On the component side, this is the -15 V circuit through-hole fuse component (after replacement): 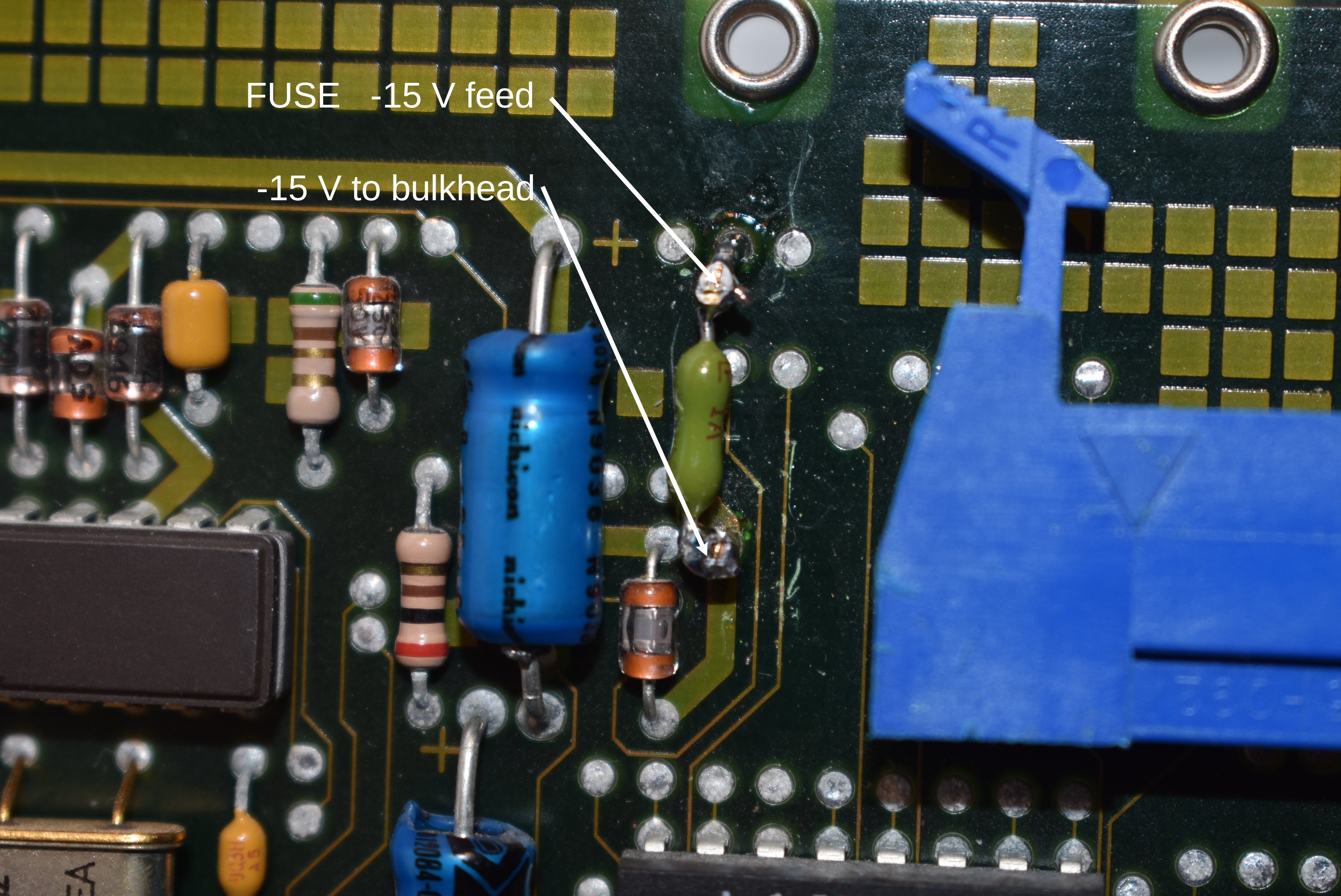 I did not know the rating of the fuse that failed, not having found a schematic for the DELUA M7521 board.  I did have, however, a failed DEQNA (Qbus Ethernet) board that had the same on-board fuse.   I removed it from the scrap DEQNA, soldered it onto the DELUA, and it is now repaired and working.  The full CZUAD diagnostics have passed.

I wish all board repairs were so easy, particularly because I do not have board extenders to diagnose faulty boards in-situ.  Logic analyzers are not usable in the tight confines of a UNIBUS chassis with its board spacing.

Today, while porting the MRY Print Spooler banner-page language processor to TOPS-20, I discovered that the KCC C Compiler does not support binary constants.

So I added binary constants to KCC-6.   It was trivial.

The SIMH PDP-10 simulator from Richard Cornwell was updated to his Version 3 recently.  See his posting to the SIMH message board on groups.io: https://groups.io/g/simh/message/1111

Having learned that it was supporting the DBD9 disk images for RP07, I decided to set up his version to boot my KLH10 images of TOPS-20 7.1 (my PANDA and SRI hybrid).

Things did not go particularly well, however.

I copied my system disk images (A dual-RP07 pair), and booted to standalone.  I disabled most all services (networking, etc) in TOPS-20 and then shut down.  I then disabled networking (the NI20 device) in SIMH, and then booted again.

Once booted, I ran a Dhrystone test on the Cornwell's SIMH PDP-10 (KL10B) and under KLH10.

This was all fine and well, as I didn't expect SIMH to perform as fast as KLH10.

The problems encountered were due to the crashes that occur when booted under SIMH when any code compiled with the KCC C compiler is run.  Many programs seem to just hang, but can be stopped with ^C.   Some sort-of work, but TTY output is problematic.  A simplified UNIX cat(1) program doesn't output to the TTY correctly.  And many programs will crash TOPS-20.  While I'm aware that there is code in KLH10 to accommodate the "Panda Lights" console-light hardware, I do not know of any changes to the underlying machine simulation particular to the Panda or SRI TOPS-20 kernel changes, nor any changes made to accommodate KCC C-generated machine code.

There is also something amiss with the SIMH PDP-10 timer support.  Calls to the DISMS monitor JSYS result in waits (dismissals) that are 4 to 5 times longer than the milliseconds requested.   That is, a one-second wait/dismissal request doesn't return for 4-5 seconds.  Timer-based macro programming through DISMS is failing under SIMH.

I may investigate the SIMH  PDP-10 issues/limitations at a later date.  For now, I have satisfied my curiosity about the SIMH-based PDP-10 simulation functionality.

When connecting via TELNET to a running KLH10-simulated OS instance from a FreeBSD machine, I have found that the connection was being dropped after two hours. The following is what I learned about FreeBSD, and how I resolved the issue.

After an upgrade of my KLH10-hosting FreeBSD platform from FreeBSD 12-RELEASE to FreeBSD 13-RELEASE, TELNET connections began dropping after two hours of inactivity. I had not associated this with the FreeBSD upgrade, and didn't take time to diagnose the problem right away. I did determine that the disconnections did not occur when originating the TELNET connection from Linux-based machines. At that point I opted to create a relay-login account on Linux to perform the TELNET, and I would investigate later.

I've whipped out the tcpdump(8) and monitored the TELNET session.

In the output and texts below, the following hostname and operating systems are at issue:

The actual OS hosting the KLH10 PDP-10 simulator is not at issue, since the raw packets are passed to the TOPS-20 OS and are not otherwise acted upon by the hosting OS.

The following tcpdump(8) output was captured on the KLH10 simulator host with:

# tcpdump -nnSX -i em2 host tops20.mrynet.com and port 23
(em2 is a dedicated ethernet interface name on the simulator host logically attached to the KLH10 simulator):

Shown in the above log section are the following activities:

21:53:43.982697 is the timestamp of the last TELNET connection transmission, this one being an ACK from the TELNET client.

00:03:44.133015 This packet is sent by the the FreeBSD TELNET client's host to finally shut down the TCP connection carrying the TELNET communications. It is sent as a result of the FreeBSD client host not having received responses to the keep-alive packets.

00:03:44.134285 is the response from the TOPS-20 OS dutifully complying with the connection shutdown. TOPS-20 will have notified the TELNET server of the connection being closed.

While I do not know why this has suddenly become an issue when upgrading my FreeBSD systems, I have tracked down the functionality within FreeBSD that controls these keep-alive packets being sent on established TCP connections.

The descriptions of these settings, from the Freebsd tcp(4) man page, are:

When set, assume that SO_KEEPALIVE is set on all TCP connections, the kernel will periodically send a packet to the remote host to verify the connection is still up.

Amount of time, in milliseconds, that the connection must be idle before keep-alive probes (if enabled) are sent.

Number of probes sent, with no response, before a connection is dropped.

These settings, and their default values, result in the following explanation of the packets at issue:

The TCP specification does not state that any keep-alive protocol should be employed. And it hasn't been for TELNET connections previously.

The resolution (workaround?) for this situation is to turn off the always_keepalive setting on the host running the TELNET client to connect to the TOPS-20 system instance.

I do not know if this is purely specific to FreeBSD, but I do know that it isn't occurring with the Ubuntu Linux kernel 5.4.0.

Regardless, the specific action to fix this is to run the following command on the TCP-connection-originating FreeBSD host: